Grenache Noir is grown in every appellation and present in most blends. To many, ‘Grenache rosé’ is a term used almost interchangeably with ‘Provence-style’. Many, if not most, of the old gobelet vines seen in vineyards across the south are Grenache. 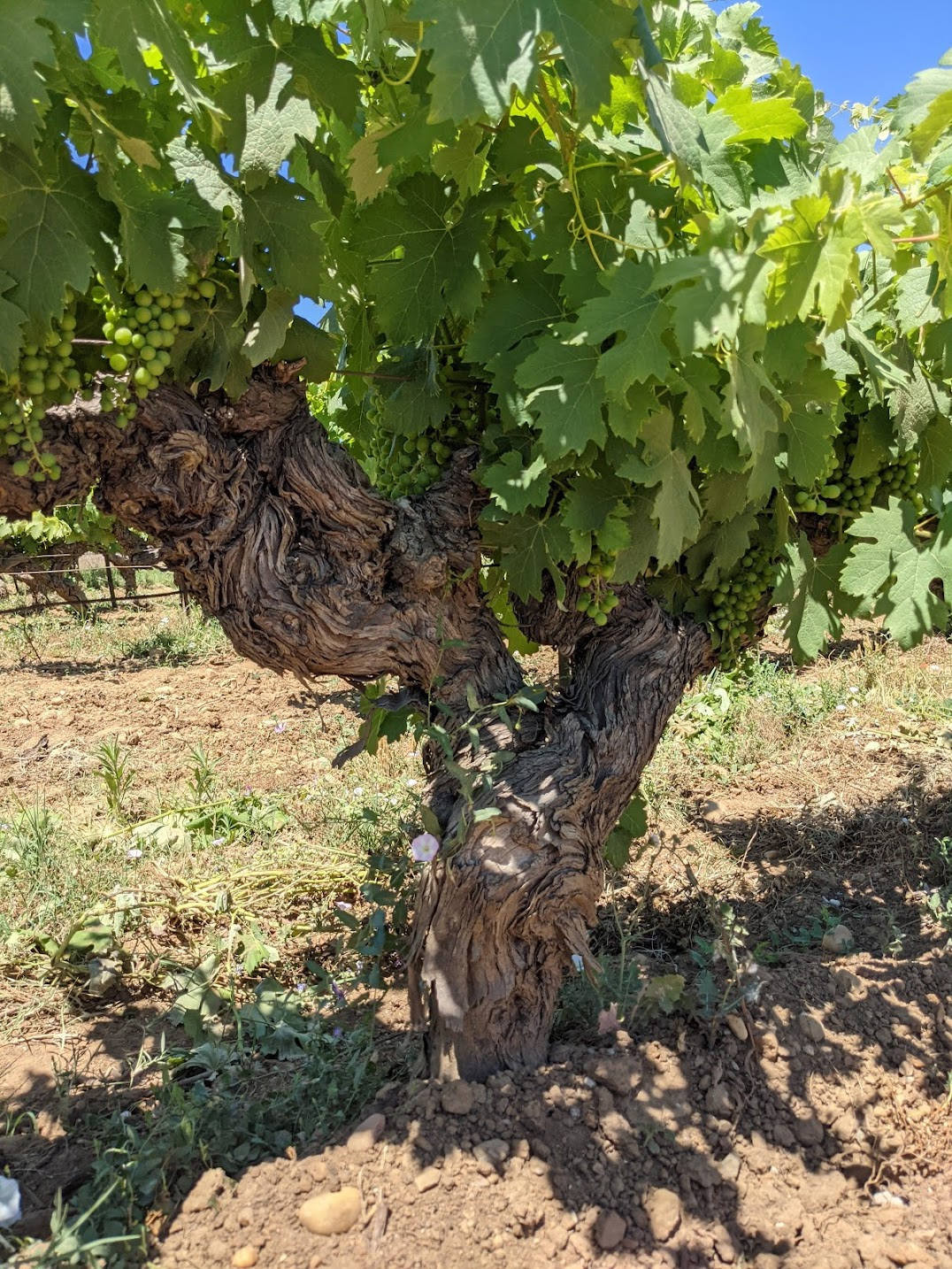 Grenache oxidises very easily, which makes it particularly suited to the reductive winemaking that dominates the modern rosé scene. Its juice is naturally quite pale, and tends towards a translucent, brickish colour, lending rosés their signature pale salmon hue, shifting to copper as they age. Grenache typicity is best described as “peachy and creamy” – peaches and stone fruit on the nose, accompanied by a soft, creamy palate.

It only became truly widespread in the south in the second half of the twentieth century, planted as an ‘improver’ and qualitative grape to replace Carignan and Aramon. Its key quality was its very high potential alcohol, essential when big reds were all the rage. Mastering that alcohol today can be tricky, and the easiest solution of earlier harvests can lead to unripe, austere wines.

Grenache is also the base of many rosés in Spain, especially Catalonia and Navarra. The style in these regions is significantly different to that found in southern France, tending towards darker, more full-bodied wines, sometimes perceived as slightly old-fashioned. There it is more often bottled as a single-variety rosé, which is relatively rare in France. Most 100% Grenache rosés are not particularly exciting, although they can be good if some Grenache Gris is included as well.

Grenache is very prone to coulure (flowers not becoming grapes) and, as an early budder, does not tolerate spring frosts very well. It is therefore particularly susceptible to vintages that start with a ‘difficult’ spring.

Tibouren, a famously difficult grape to work with in the vineyard, is increasingly popular in Provence as a unique, autochthonous, and highly qualitative variety. Its heartland is between Toulon and Fréjus, including the coastal area between La Londe and Saint Tropez. It is not found outside this area. Côtes de Provence Fréjus requires a minimum 20% Tibouren in the blend. Despite its recent renaissance, there are only 450ha planted in France, and new plantings tend to be quite small. Tibouren’s uneven ripening is one of its major strengths. When all grapes are harvested together, the least ripe grapes and bunches provide much-needed acidity. Many of the seemingly unripe berries are in fact phenologically ripe, even if they appear small and green. Their small size is often due to an absence of pips, resulting in more concentrated pulp – at the expense of yield. Harvesting late can lower this acidity considerably, and then Tibouren requires careful blending with other varieties. As well as the high acidity from its varyingly ripe bunches, Tibouren provides delicate structure and elegant, juicy red fruit with restrained floral notes.

Mattieu Savatier of Château de Rouët (Fréjus) notes that because of the variety’s paler colour, greater fruit extraction can be obtained without too much risk of excess colour. On the maritime schist soils of La Londe the fruit is more concentrated dried apricot and fatter (Galoupet, Clos Cibonne), while on the volcanic soils of Fréjus the fruit is more white, restrained and floral (Paquette, Rouët, Domaine des Planes). Apricots are the most common tasting note for rosés including Tibouren, and is one of the better indicators. Tibouren lends itself well to oak (Clos Cibonne, Château Paquette, Torpez, Château Galoupet), but its delicacy and freshness also produce excellent fresh-and-fruity wines to be drunk a little younger such as those of Domaine de l’Ile on Porquerolle, Domaine des Planes (Fréjus) and Château la Tulipe Noire (Pierrefeu). Recent ampelography has confirmed Tibouren to be the same variety as Rossese, the Ligurian grape of Rossese di Dolceacqua fame, although we believe that there is significant clonal variation as the two behave very differently. Tibouren is easy to recognise in the vineyard for its blotchy, unevenly-ripened bunches similar to millerandage. Rossese, on the other hand, ripens evenly. Only one clone is widely used in modern plantings of Tibouren, although some estates take cuttings of their own old vines for sélection massale. The alternative spelling ‘Tibourenc’ does not indicate a clonal difference. In Liguria, Rossese is exclusively made into a light, delicate red wine, whilst in Provence, only two estates that we know of make any red at all from Tibouren: Clos Cibonne and Château Simone in Palette (then, only making up a small part of the blend). Randall Grahm, an unconventional winemaker and the original ‘Rhône Ranger’, has recently started making a Tibouren rosé in California, but in tiny volumes. In short, Tibouren is always a grape to look out for, usually an indicator of excellent wine as well as geographic provenanc

Syrah is increasingly common in rosé blends as production shifts away from red wines across the south. Historically, it is a Rhône variety, but it takes a backseat role in Provence too. It is unlikely that it will progress much further for rosé, as producers say that it is struggling in the warmer vintages, especially in coastal vineyards. Despite this, Syrah is still often thought of as a prestige grape, and Syrah-dominant rosés can command a higher price tag and serious winemaking.

Under-extraction and over-filtration can lead to a distinctive and (in our opinion) rather unappealing purple-blue tint to the rosé that is unique to Syrah. This is difficult to capture on camera, but is best described as having the red-purple-blue tints of a red wine, but with intensity or saturation bleached out. Unfined or unfiltered, the wines are fuller-bodied and can be quite dark, a reputation that some Syrahs wear with pride. One of the most-used methods to mitigate this intense colour is early harvesting followed by extreme chilling before pressing the grapes. Especially in cooler, ‘difficult’ vintages such as 2021, this can result in a slightly lean, austere and acidic rosé if not subsequently blended with juice from riper fruit.

Some Syrah-majority rosés exhibit intense floral thiol notes or boiled sweet character, but well-made Syrah rosés should be somewhat reminiscent of a good Syrah red – full of berry fruit, spice, gently peppery and spicy, an intense colour and stunning ripe structure that can hold up to oak. Good examples of Syrah rosés that achieve this richness include Château Rasque in Provence, whose Cuvée Clos de Madame is an unusual 85% Syrah and 15% Rolle, a rich, intense, structural rosé with plenty of black cherries and a chocolatey silkiness. In the Rhône, Domaine Mourchon’s Soubois is 100% Syrah in most vintages, and is a good example of how Syrah benefits from 5-6hrs of maceration and a few months of oak, leaving it with stunning intensity of dark fruit and a weighty structure. When allowed to take on a little colour, inexpensive Syrah rosés from top cooperatives can be stunning – Collines du Bourdic in Duché d’Uzès and Alma Cersius near Béziers both make excellent single-varietal Syrahs. There is a small trend in top rosé estates to train the variety sur échalas, as in the Northern Rhône, with each vine trained on its individual stake. This can help ventilate the rows and keep the vines healthy. Clos du Temple, Miraval and Château Cohola are the major proponents of the technique.